Why These Sires Are Ideal For Black Opium

WITH the retirement of superstar Black Opium, all eyes will be on who owners Bill and Serg Buccilli decide upon as her future breeding partners. 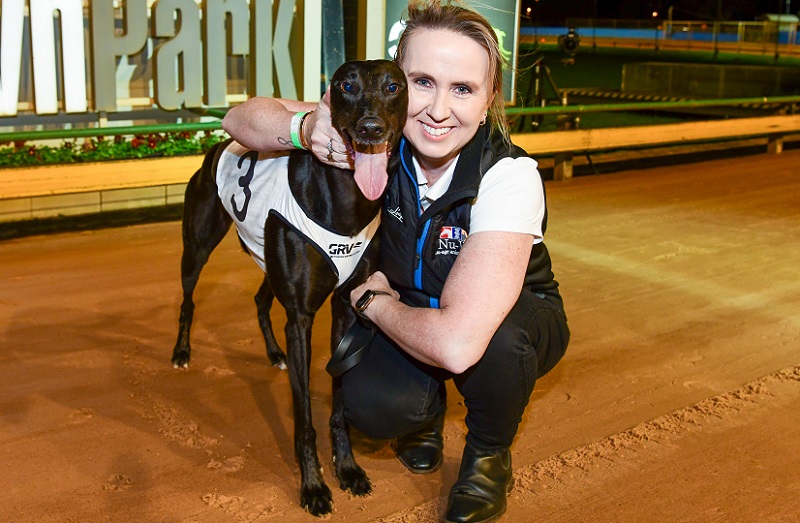 WITH the retirement of track superstar Black Opium, all eyes will no doubt be on who owners Bill and Serg Buccilli decide upon as her future breeding partners.

The daughter of Black Magic Opal-Captivating by Collision retired with a career record of 61 starts for 29 wins and 15 placings earning $564,000 along the way.

Her crowning glories were wins in the Group 1 Sapphire Crown and Brisbane Cup.

But her list of Group placings and final berths is impressive to say the least.

Most owners never get to have a starter in an y Group race let alone one dog who has won, been placed in or a finalist in such races as the Melbourne Cup, Australian Cup, Brisbane Cup, Golden Easter Egg, National Sprint, Topgun and the Million Dollar Chase.

So, now that Black Opium has retired, who do Bill and Serg look to as potential mates for their glamour girl.

To make some suggestions, we first need to look at the bitch herself, her pedigree make-up and how we can “upgrade” her to make her offspring even better.

That last statement will prove our undoing.

With all bitches who retire with a race record the likes of Black Opium, the task of making her offspring even better is a daunting, if not impossible one.

Black Opium is a 31kg bitch so immediately we are unlikely to consider stud dogs like Barcia Bale who generally put in great size into their progeny.

But, she instantly opens herself up for a mating to legend Fernando Bale.

The pedigree of Black Opium is intense. She carries a 3×4 duplication and balance of Brett Lee top and bottom of her pedigree. She is in-bred 3×2 to sons of Awesome Assassin in Most Awesome and Collision.

She brings in three crosses of the famed Placid Dove damline and also a saturation of the famed litter sisters Zulu Moss and Riviera Moss.

Her mother Captivating has already done well when mated to Knocka Norris (G1 finalist Poise) and the KC And All mating has produced boom youngster Immunity (11 starts, 9 wins) and Equalizer.

So, where does this lead us to with Black Opium.

In my opinion she is absolutely ideal for potential matings to Fernando Bale, Zambora Brockie, the US stud success Superior Panama, and the unproven Hooked On Scotch and possibly Sennachie. I’ll explain them all.

This is a very, very obvious potential mating for Black Opium.

Being a 31kgs bitch there should be no worries about her offspring being on the small side as some of Fernando’s progeny, especially his bitches, can be.

The fact Black Opium has Collision in her direct damline bring in the proven cross to Fernando, proven via such greats as Dyna Patty, Whiskey Riot, Fernando’s Riot, Trouper Monelli all G1 stars bred on this cross.

The DAUGHTER strain of Awesome Assassin in Fernando Bale helps to balance the two SON strains in Black Opium.

The significant double of Head Honcho 5×5 is still positioned to impact for chase.

And, a 2×4 cross of Chloe Allen and Bombastic Shiraz who are bred along similar lines, is also introduced.

AND, to top off all this, Black Magic Opal, sire of Black Opium, brings in a cross of Proper Tears along his direct damline. Proper Tears traces directly along his tail female line to none other than Gail’s Beauty the Wheeler family’s famed foundation bitch who is also along Fernando Bale’s direct female line.

While it is a bit too much for us to ask for any litter out of Black Opium to produce champions … a couple of dogs from this potential mating could certainly earn a spot in my back yard.

Again, this mating brings in a number of hugely proven crosses in a bid to help Black Opium become a success at stud.

The potential mating will introduce a 3×4 duplication and balance of Bombastic Shiraz at the top and bottom of the pedigree. It will also introduce a 4x4x5 cross of the famed litter brothers Trendy Leigh and Brett Lee.

But, there is even more to be picked up in this mating.

It will introduce a double of the famed Genuine Replica family through Zambora Brockie’s tail female line and through Most Awesome in Black Magic Opal. This cross is already proven via Black Magic Opal’s star G1 performers True Detective and Lightning Frank.

Interesting too, it will introduce a double of that great broodbitch Zimbabwe via her son Chief Babwe in Brockie’s damline and she is also found in the direct damline of Bombastic Shiraz.

With such an intense pedigree, Black Opium could do very nicely at some stage of her breeding career by being outcrossed. It will allow for a degree of hybrid vigor to be put back into her bloodlines, and then allow for her daughters to be intensely line bred again “down the track”.

Superior Panama is a huge success, and very popular because of it, in the US.

However, he has a very strong cross of TNT Star Wars as his damsire. The son of Fortress-Greys Stardust is bred identically to the dam of Kinloch Brae who, we all know, has been a huge success at stud in Australia. That’s because he has lots of Aussie bloodlines in his immediate damline … as as TNT Star Wars does.

And, we all know Kinloch Brae has produced a multitude of Group stars when mated to bitches with Collision and Bombastic Shiraz in their pedigrees … both of them an influence in Black Opium.

Add to this, Black Opium’s mum is the dam of Immunity and Equalizer to a mating to KC And All … the sire of Superior Panama.

The fact both greats were trained by Jason and Seona Thompson will not be lost on anyone with a minuscule of interest in who Black Opium is mated to.

I would suggest this mating will be done at some time in Black Opium’s stud career.

Bill and Serg will know only too well the ability of Hooked On Scotch being so close to the kennel.

But, there is also a 4×4 link between Vapour Whirl and Bombastic Shiraz to be introduced. They are bred along very similar lines. They are found in the dam of Black Magic Opal’s multiple G1 winning son Lightning Frank.

Bill and Serg will no doubt be researching potential matings for Black Opium.

Her daughters will obviously supply them with generations of offspring almost certain to produce more greats. It is a damline that has been tossing up legends for many generations.

It’s a tough position for them to be in!