CANYA Cruise broke the Albion Park 395m track record on Wednesday and could now be headed to a series of feature races in the coming weeks. 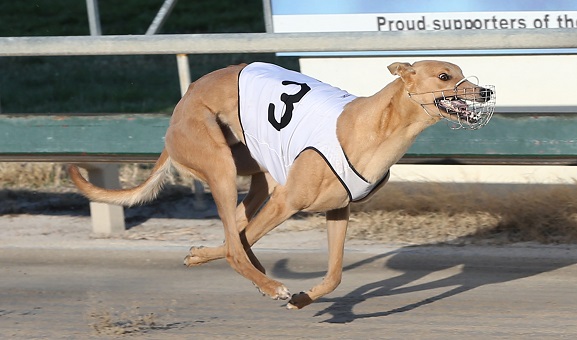 EXCITING youngster Canya Cruise broke the Albion Park 395m track record on Wednesday and could now be headed to a series of feature races coming up in the next six weeks.

They include the Group 3 Townsville Cup or even a potential trip to Victoria for the $50,000 to-the-winner Group 2 Bendigo Cup.

Owner Terry Hines was understandably elated about the 22.25 track record the son of Barcia Bale and Crazy Sexy ran when winning a heat of a 5th Grade series.

It eclipsed the previous mark set only a week before by Magical Bill at 22.28.

Magical Bill ran 22.35 when winning a top grade, the race directly after Canya Cruise had broken his track record for trainer Serena Lawrance.

Hines paid $20,000 for Canya Cruise after breaking in with a “high speed” report at Cudal in NSW.

“I am friends with Toby Weekes and had asked him to look about for a young dog for me and he came up with this bloke,” said Terry.

“The report was that he had phenomenal early pace. Who doesn’t want that sort of dog?”

Debuting at Ipswich in February, winning a heat of the Vince Curry Maiden in a fast 30.58, Canya Cruise will now run in a 5th grade final at Albion Park next Wednesday before targeting a series of feature races.

“There is a 395m race worth a bit of money coming up soon, and then we could look at either the Townsville or Bendigo Cup,” said Terry.

“Townsville is almost 500m and we would probably prefer to work him up to that distance again.

“But Bendigo is 425 metres and looks ideal for him. But both those Cups come
close behind those 395 metre feature races at Albion Park.

“He’d need to trial at the track before running in the heats of either of those Cups.”

Canya Cruise also holds the first section record at Ipswich of 5.21 which he set during the Vince Curry Maiden series early in the year.

Minor injury problems have kept the dog off the scene until now. He has won three and been placed twice from seven starts.

He had signalled a track record was on the cards with a 22.35 win just a week ago, a performance he more than lived up to on Wednesday.