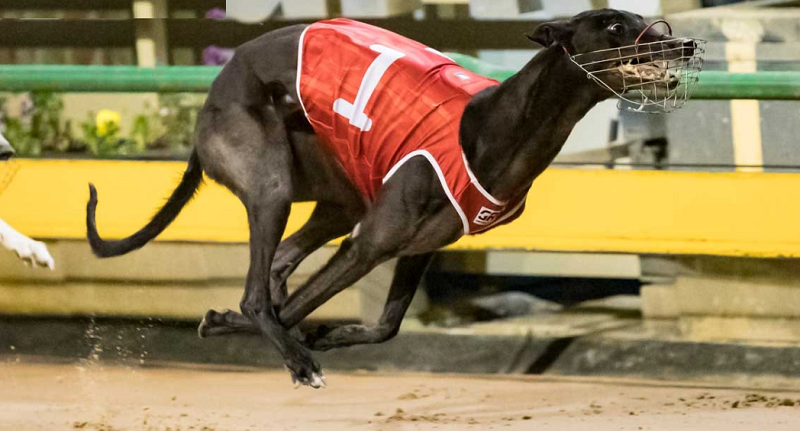 WIN, lose or draw in Friday’s Group 1 Bold Trease with Blazing Cartier, NSW-based owner Tom Rees plans to walk away from Sandown enthusiastic about what lays ahead.

Cementing her spot in the $105,000 to-the-winner feature with a runaway 41.68 heat success for trainer Rob Britton, Blazing Cartier has been installed third favourite at $4.40 with Beteasy for Friday night’s final, the daughter of My Bro Fabio’s first assignment at group 1 level.

“I’m more excited than anything … probably because I know that she’s just got so much ahead of her after Friday,” beamed 38 year-old Tom Rees.

“She’s not 2 ½ until the end of the year and you can just see how much she’s improving. I’ve never been to Sandown before so Friday will be my first time, I’m really looking forward to the night. Can’t wait.”

Adding to Rees’ confidence that Blazing Cartier is set to make her presence felt in Friday night’s decider is a glowing assessment from her trainer Rob Britton, declaring the daughter of My Bro Fabio and Esparza’s preparation spot on for the feature event, named after four-time Sandown Cup winner Bold Trease.

“I spoke to Rob on the (Saturday) morning after her heat and he said that she was bouncing around like she hadn’t even raced which didn’t surprise me,” Rees added.

“I bought both her and her brother Blazing Hype when they were 12 weeks old off Michael and Michelle Jones at Nabiac and brought them home to rear. You could always tell there was something about her; she’s just a beautifully natured dog.”

Interestingly, Rees is more than happy with Blazing Cartier’s box six draw but says Britton has a different tact.

“I don’t mind her drawn wide in six but if you ask Rob he’ll tell you he’d rather her from the inside in a race like this,” Rees explained.

“I think being drawn outside Rajasthan is an advantage, he won’t leave the fence so I’m just hoping my girl is out wide doing her own thing. She’s very strong.”

Winner at eight of her 29 starts, Blazing Cartier began her racing under the care of Rees before he elected to send her south to further her career under Britton.

“I had a dog with Rob back in 2014 called Little Red and I promised myself that if I ever got a good one that could make the grade I’d send it to him,” Rees said.

“She won a couple in a row at Wenty for me a few months back and I was relocating at the time so I got in contact with Rob and it’s gone from there.

“He’s done a great job with her and I still think he’s learning about her all the time; as I said I’m really excited about what’s ahead for her whatever happens on Friday.”

Equal favourites for Friday night’s Bold Trease are Boom Down and Blue Moon Rising, currently $3.30 each with Beteasy.

The pair of course fought out a thrilling finish to the Sydney Cup at Wentworth Park on Million Dollar Chase night last month, Boom Down claiming the $100,000 to-the-winner event in a classic last stride finish.

In last week’s Bold Trease heats, Boom Down set the time-standard recording 41.63, while Blue Moon Rising led all the way in 41.79.

The other run-off was won by Tornado Tears in 42.10 in a blanket finish, edging out Rajasthan and Mrs. Emgrand in one of the best photo-finishes you’ll see.