Futurity The Target For On The Rocks

From the moment On The Rocks first waltzed into Donna Campbell’s Belimbla Park kennels she strutted around like she owned the place. 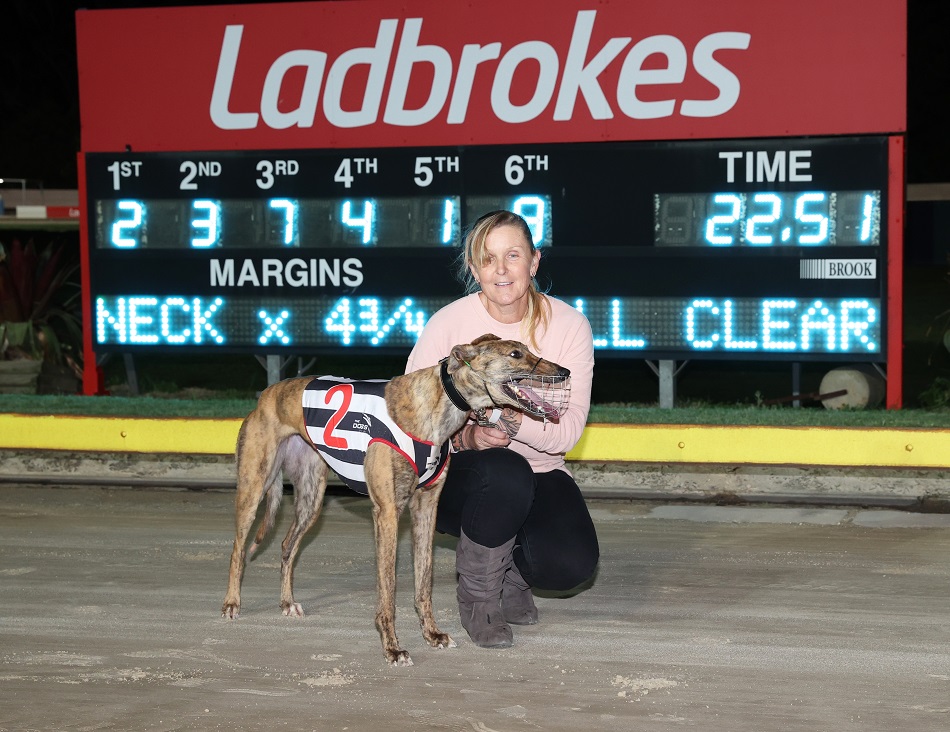 From the moment On The Rocks first waltzed into Donna Campbell’s Belimbla Park kennels she strutted around like she owned the place.

“She’s got plenty of sass about her – the good ones usually do,” Campbell said.

“From the minute she came back from the breakers she wasn’t shy in letting the other dogs here know she’s the boss. There’s just something about her.”

It was last Wednesday that On The Rocks was responsible for one of the most impressive first up Wentworth Park victories when demolishing a strong field to win a heat of the Ladbrokes Bitches Only series in a slick 29.84.

And while the overall time was fantastic, her sectionals were elite.

Group level elite – running 5.41 early before recording a blinding 13.75 and 17.90 up the back straight before still managing to break 12 seconds in the run home.

And while Campbell was ecstatic with the powerhouse win she admits to being even more pleased the following morning.

“I expected her to be flat the next morning but she was bouncing around great … she came through the run better than I expected,” Campbell said.

“I half thought she’d be flat and to be honest get tired in the run to the line in her heat. But she just keeps surprising me; hopefully it’s exciting times ahead.”

On Saturday night, On The Rocks, a 22-month old daughter of El Grand Senor and Starboost, will exit box eight in a red hot Ladbrokes Bitches Only Final (520m) at Wentworth Park.

The hugely exciting bitch goes into the $10,000-to-the-winner decider as the winner at 10 of her 13 career appearances which includes another two minors.

“So I’m just hoping my bitch begins like she can and holds her line. I gave her a post-to-post at Dapto to top her off and was happy with how she went.

“Her best strength is her box manners – she just doesn’t miss the start.

“She’s such a professional little race dog – she races like she’s been going around for two years, not 13 starts.

“When she won her first start at Richmond she was just 16 months and three days old. I don’t like starting them that young but with her it was different.

“The first trial I gave her at Dapto when she was 13 months she ran 17.06 for the 297m. I left that day thinking she might be a bit special.

“Everything she does she does right and gives 100 percent, you can’t ask for much more than that.”

By El Grand Senor, not renowned for throwing hardened 520 metre greyhounds and out of Starboost, a well travelled bitch known more for her sprinting capabilities, Campbell admits to having concerns early doors as to how her budding star would see out 500 metres.

“I said to the owners early on when she was winning and running brilliant times that 500 might be a stretch,” Campbell said.

“But it just shows there’s no rules with breeding. She’s still only young and you’d think she’ll still get stronger. I’m not looking too far ahead but the National Futurity looks an ideal race for her.”

Adding extra weight to On The Rocks’ early success is the fact she’s raced by a syndicate of first time greyhound owners.

“Some friends of my daughters wanted to get a dog so they did their research and bought her as a pup for $4000,” Campbell said.

“They’re in horses but this is their first greyhound – Terry Clyburn and Penny and Dave Hutchsion own her and are having a great time.

“They’ve had a few decent offers for her already but are having too much fun. Down the track they’ll breed with her as well. There’s not a thing about the bitch I can fault.”

Campbell was also quick to heap praise on racing officials for programming the two series’ which separated dogs and bitches last week.

“They got full fields with plenty of good dogs for the heats just by being a bit creative with the programming – there should be more of it.

“To be honest had this race not been on my bitch probably wouldn’t have been in town yet. It gives the bitches a good chance to race their own sex and build up confidence.”