RACING will cease at Grafton on August 24 with work scheduled to get underway on the track's eagerly awaited $4.2 million redevelopment.

RACING will cease at Grafton on August 24 with work scheduled to get underway on the track’s eagerly awaited $4.2 million redevelopment.

“I am not sure where most of the race meetings we would normally run will be going to but expect most of them to be retained on the Northern Rivers,” Corrigan said.

He said the club would be given two weeks to clear out anything from the complex it needed.

“We’ve sold things like the kennels, the air conditioning etc. and they need to be removed,” said Corrigan.

“After that the demolition work will start and take about three weeks.”

Actual building of the new complex is expected to start in early October.

“We are very much looking forward to the new complex – it will be huge for the industry in the Northern Rivers,” said Corrigan.

“Racing will be over 360 metres, 450 metres and 650 metres and there will be 60 metre transitions into and out of the turns.

“It certainly will be a centre of excellence. March 13 next year will be the end of an almost three year project for the club and GRNSW.” 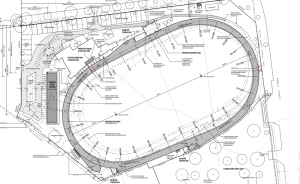