FORMER AFL rookie Brent Kline has switched his sporting endeavors to greyhounds with success and he is an avowed fan of Group 1 star Hard Style Rico.

FORMER AFL rookie Brent Kline has switched his sporting endeavors to greyhound racing with great success and he is an avowed fan of Group 1 star Hard Style Rico.

And, Brent has every right to be.

Not only has he bred two of the first litters by the Sandown track record breaker and Melbourne Cup winner, he also owned and trained a litter sister to the Bella Infrared-Bella Rico dog called Riccolina Girl.

And it was Riccolina Girl which convinced him he should breed successful race bitches Ryall and Isla’s Style to Hard Style Rico.

“She was something else,” said Brent of Riccolina Girl.

“She had the heart the size of Phar Lap. That’s why both our bitches have been to Rico at stud. His first two litters.”

Ryall (Barcia Bale-Demi Cali) won the Hobart Thousand Maiden but a hairline fracture of a hock restricted her racing career.

She has produced five dogs and four bitches to her mating to Hard Style Rico and they are now five weeks old. 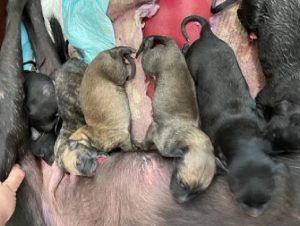 Isla’s Style won the Silver Dollars at Albion Park and was a finalist in the Group 2 Sandown Laurels.

Brent has been able to keep only one pup from each litter such has been the demand for the pups.

“We advertised them for sale not long after whelping and within three hours, each of the litters were sold,” said Brent. “It was amazing.”

Isla’s Style has already produced a handy litter by Fabregas which includes Fab Femme and She’s Whistling both prolific winners in Queensland.

“To me, Hard Style Rico was a no brainer for both bitches,” said Brent.

“He ticks all the boxes. He was fast early, never run down if he led, and a great chaser.”

Brent Kline was among the North Melbourne rookie list as a youngster and played plenty of grade footy before a motor bike accident fractured his pelvis and put a stop to that career.

He has been a fine trainer since taking up greyhound racing in Queensland … and a devoted fan of Hard Style Rico obviously.