PEDIGREE expert David Brasch runs his eye over all things happening in the breeding world, including some very interesting matings. 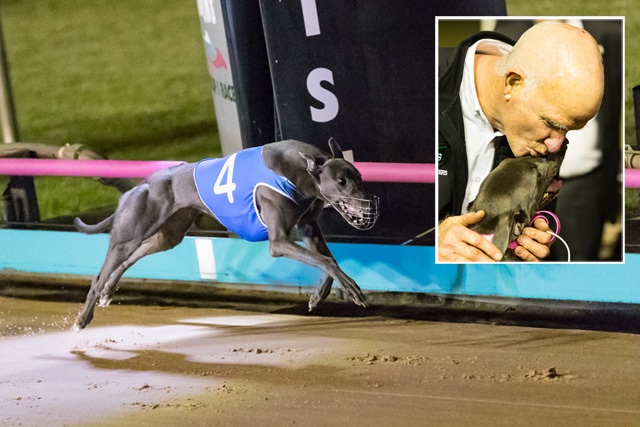 MULTIPLE track record breaking Queenslander Champagne Sally has come on season and will be mated to Out Of Range.

Out Of Range (Fernando Bale-Nicki Fields) is now at stud in Ireland.

Champagne Sally was something else on the racetrack breaking track records wherever she went. She holds the mark at Albion Park over 600m and Ipswich over 520m and 630m. She also won the Topgun Stayers last year and was third in the Zoom Top and a finalist in the Bold Trease.

It is already a proven cross.

Out Of Range’s damsire Knocka Norris was mated to the Burman’s bitch Bomber Babe to produce the outstanding Top Story. Bomber Babe is bred on the same Bombastic Shiraz/Up And Down cross as Bizarre Barbie.

The Burmans will have plenty of youngsters to go on with in the future.

Her litter by Zambora Brockie is bred on the same cross as Brockie’s fabulous young litter that includes No Easy Beat (29.60 Albion Park).

And their dam Bizarre Barbie (Velocette-Skinny Magic) has a six month old litter of five dogs and two bitches by Aston Dee Bee being reared.

The 64 semi-finals are sired by 23 different stud dogs.

Of those, 10 have more than one representative.

Five of the sires, Fernando Bale (9), Kinloch Brae (8), Barcia Bale (8), Fabregas (7) and Collision (6) have a combined representation of 38 of the semi-finalists or just under 60 percent.

OVER in South Australia, Wendy Sebastyan has a very interesting litter of three dogs pup giving a former local star a chance to prove himself.

Unfortunately, Ernie was never able to get a chance to do the same proving infertile.

Wendy’s Woodnear litter are out of Kool Alexis (Velocette-Whirly Storm) a bitch that was Qld-bred.

She started 96 times and won 11 being placed 26 times. She was a finalist in a Young Guns at Ipswich before being sold to Wendy at Cooke Plains.

Her dam Whirly Storm was a fabulous race bitch for Reg Hazelgrove winning 20 races and making a Group 1 final. She won the Lismore Gold Cup at G2 level.

The Woodnear-Kool Alexis litter is in-bred 3×3 to Bombastic Shiraz along the direct sireline on both sides of the pedigree. It also has three crosses of Walkabout Sid.

Alpha Nemesis (Cosmic Rumble-Queen Of Cyprus) was third in the Group 2 Laurels and her mother is a three-quarter sister to champion Queen Lauryn.

The mating to Zinzan Brooke (Knocka Norris-All Fired Up) has produced two dogs and three bitches.

Alpha Nemesis’ owner Chris Georgiou will get one of the pups on a deal done with Sandro, but three of the other will be for sale … around $2500 for a bitch.

This is a damline that continues to churn out special race dogs.

WHEELER Kennels loves nothing more than digging out semen from long retired dogs of their own and mating them with young quality race bitches just off the track.

That’s just what has happened with the five dogs and four bitches produced by David Bale and Dyna Zesty.

David Bale (Bartrim Bale-Dyna Beauty) is the 2009 whelp who won the G1 Topgun but has been at stud in Ireland for years. Wheelers bred champion Fanta Bale by him.

All seven in the litter were prolific winners.

HOSTILE Guess is a handy young dog over in WA and a recent Cannington winner in 29.89.

His pedigree is one for breeding enthusiasts to savour.

Hostile’s third dam is Roxy Reason (G2 WA Oaks) who just happens to also be the dam of El Galo.

Hostile Guess is in-bred 3×2 to half relations. Six of the nine in this litter are winners and they only turned two in July.

NOTICED former Queensland greyhound of the year Fast Times is starting to get his first pups on the ground.

One of the first was the five dogs and two bitches whelped for Rod McDonald at Cowra from the Fabregas-Dana Beatrice bitch Dana Kis.

Dana Kis was a sound and genuine bitch who raced 124 times for 17 wins and 35 placings.

All nine of her litter were winners.

And why wouldn’t they! Their dam Dana Beatrice won 28 races and $251,000 including the G1 Golden Easter Egg.