JUST Terms has delivered Anthony Azzopardi a second Zoom Top with victory in the $75k to-the-winner staying invitation at The Meadows Saturday night. 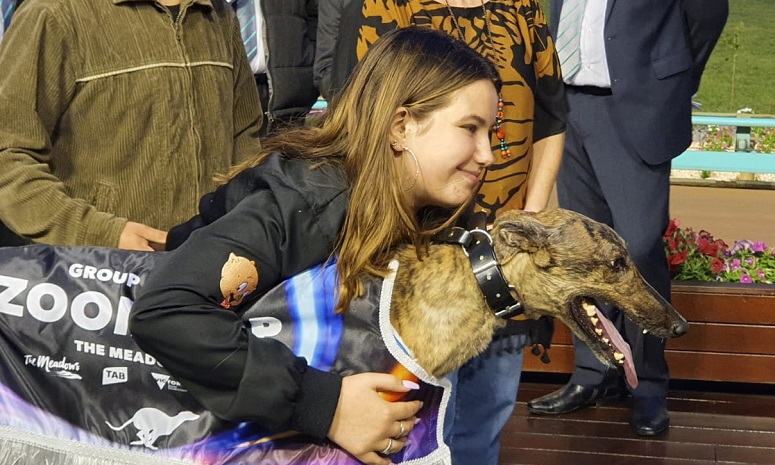 PREMIER trainer Anthony Azzopardi has enjoyed a red letter night at The Meadows, securing a group 1 double in the Temlee and Zoom Top invitationals.

On yet another memorable night for the Victorian conditioner, Melbourne Cup hero Whiskey Riot secured the Temlee (525m) in emphatic fashion for Azzopardi, while earlier in the program Just Terms stormed to victory in the Group 1 Zoom Top (725m).

Winner of the group 1 event with No Donuts in 2016, Azzopardi was brimming with confidence about Just Terms’ Zoom Top prospects heading into the race, the daughter of Barcia Bale recording a slick trial at The Meadows last Monday in preparation for the staying feature.

As expected, the early pace was set by True Detective with Here’s Tears within striking distance throughout.

But positioned ominously was a rampaging Just Terms, powering into proceedings off the top turn before storming away to score by 3 3/4 lengths over Here’s Tears in 42.12.

Here’s Tears’ first crack at group 1 level was a gallant one finishing second, while it was another Rob Britton-trained runner Blazing Cartier filling third.

Later in the night, the Temlee saw Whiskey Riot power away for a decisive win in the $100,000 to-the-winner invitation, the son of Fernando Bale right on song for next week’s Australian Cup heats where he’ll go in as a firm series elect.

Stopping the clock in 29.95, Whiskey Riot defeated Paws Of Thunder winner King Cratos by 5 1/2 lengths with Slingshot Hammer third, another two lengths away.

Meanwhile, Perfect Marshall claimed the Group 1 Rookie Rebel (600m) with a go to whoa win from box one in 34.36 for Janet Cottrell and Dave Knocker.

A son of Kinloch Brae and Perfect Tess, Perfect Marshall staved off a late challenge from Rajasthan and Often Imitated to claim the $75,000 first prize in determined fashion.