LAUREN Harris is confident Fly For Fun has what it takes to put a real dent in the SA Derby which gets underway at Angle Park on Thursday night. 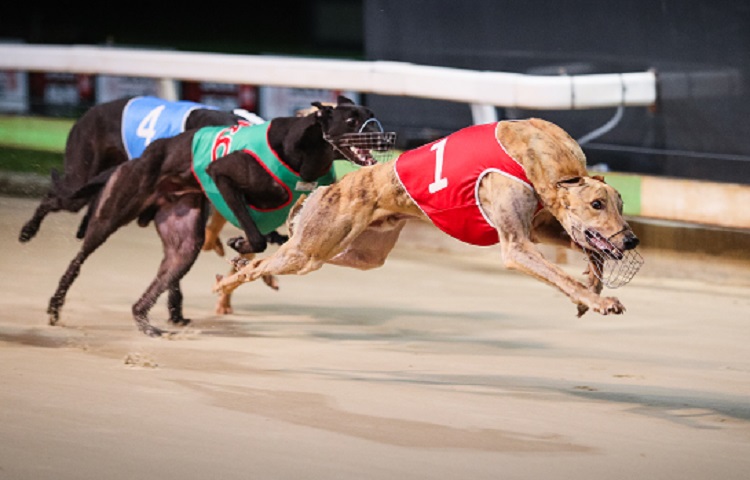 TRAINER Lauren Harris is supremely confident her star youngster Fly For Fun has what it takes to put a real dent in the Group 3 South Australian Derby series which gets underway at Angle Park on Thursday night.

Boasting seven wins from 15 career starts, the son of Kinloch Brae and Weblec Rose tackles the fourth and final Derby heat on Thursday night from box two, where Beteasy have installed him a red hot $1.65 favourite.

“We managed to get him straight from break-in and from pre-training right the way through he’s shown us he’s something special. To give you an idea, he went 25.80 at his first 455-metre Murray Bridge trial before he was even named. He just got it, right from the get go.”

Any further validation Harris needed that her rising star was ripe and ready for a Derby tilt was received loud and clear at his most recent Angle Park outing on September 2, powering away for a 10 length victory in a blistering 29.63.

“His last four wins have been in the best of the meeting which is a pretty good thing to be able to say,” added Harris.

“At home you don’t even know he’s there he’s that quiet, extremely sensible and headstrong. If there’s one little fault it’s that he can move right at the start a tad depending what leg he comes out on. But he can run very fast sections and he’s getting stronger as well … he’s exactly what you want.”

From a hot litter which includes Group 3 Cranbourne Puppy Classic winner Weblec Ace and regular city winner Weblec Jack, Fly For Fun will be joined by litter-brother Weblec King in Thursday night’s SA Derby heats, taking his place in the opening qualifier for Matt Lanigan as the $1.90 favourite.

“It’s worked out perfect for Fly The Fun to hit his best now with so many good races coming up … after the Derby there’s the match races series and then the Adelaide Cup all going well. We had Valladares make the Adelaide Cup Final in 2014 (won by Allen Deed) … it’d be nice to get there again.”

While Fly The Fun is clearly Harris’s leading prospect on a quality night of racing this Thursday, the Finniss-based conditioner is also represented by Press Secretary in heat two of the Derby from box one, while Sweet Ella takes her place in the opening Oaks heat from trap eight.

“Press Secretary has been racing behind Fly For Fun his past couple, he won in 29.90 at his first start at Angle Park … he’s in there with a chance from the box in a very strong race,” Harris added.

“Sweet Ella has gone off a bit and we’re probably more hoping with her. She’s reached her grade and gone off the boil. Both dogs are owned by George Farrugia … we’ve had good success for George.”

While the upward spiral of Fly The Fun has Harris well and truly buzzing, recent news of some impressive break-ins has also put a spring in her step.

“We’ve been breeding some litters of our own and got some great reports with five just broken-in by Kinloch Brae out of Nit Noi – three of them are Victorian city class,” Harris said.

“We’ve got a few people we like to train for but we’ve put a real focus on breeding and creating a line of our own recently … we’ve been at our new property for three years now and things are coming together great.

“There’s a lot to look forward to.”

Curt Lee and Mister Harlewood are on the next line at $5.00.