FASHIONABLY bred Sarita has some lofty family traditions to uphold when she makes her debut in the second event at Goulburn on Friday afternoon.

FASHIONABLY bred first starter Sarita has some lofty family traditions to uphold when she makes her racetrack debut in the second event at Goulburn on Friday afternoon.

Drawn box eight for her maiden 350 metre assignment, Sarita is a member of the hugely promising Oaks Road x Amyjo litter, the five pups to race so far responsible for nine wins and four placings from 13 starts.

“I’m pinching myself with how well they’ve kicked off – I couldn’t be happier,” beamed owner Peter Spiteri.

Trained for Spiteri by Jodie and Andy Lord, the five pups to hit the track are yet to miss a place in 13 appearances, led by the hugely exciting Serious Object which remained unbeaten in three starts with a thunderous 19.73 Goulburn victory on Tuesday.

“There were nine in the litter and I broke them all in at Wentworth Park,” Spiteri said.

“Nothing against anywhere else but Andrew Rowe was driving at Wenty and I wanted to make sure they chased a close lure while they were learning. So I took them there four straight Tuesday’s and after their last run over the 280m I rang Andy with the times and he took six of them. Serious Object broke in the quickest; he went 16.20 at 15 months.”

FIELDS AND FORM FOR GOULBURN FRIDAY

The exciting litters’ rapid rise continues the strong success Spiteri has enjoyed with Jodie and Andy Lord, combining with Let It Develop to win the Group 1 Dapto Megastar in 2016.

Let It Develop was a member of Spiteri’s remarkable Collison x Neat Irish litter which went on to win 106 races and almost $400,000 in prize money.

Included in that litter was dam Amyjo, the seven-time winner always pegged by Spiteri to be a successful brood.

“Right from the start she reminded me of her mum Neat Irish,” Spiteri said.

“And she could run herself, don’t worry. Her first litter to My Bro Fabio was very fast and they won a lot of races but the Oaks Road litter just have something about them.

“When Andy started them off at Canberra he told me that if they break 11 home he’s happy enough and all six of these pups went around 10.50 odd. At the moment Special Object is the pick of them, he’s just clicked right from the start.”

In what could prove a bit of a leg up for punters going into Friday’s Goulburn program, Spiteri declared debutante Sarita as being right up there with her siblings early doors.

“Andy had to ease off her a bit with the virus that did the rounds,” Spiteri said.

Always looking to improve his Bringelly base, Spiteri attributes a lot of the litter’s early success to a new bullring.

“It wasn’t cheap but it’s more than paying for itself now seeing how well these pups have come to hand. They’re not two until late October either.

“Generally you are happy getting one or two in a litter that shows you something but to get the whole litter like this is unbelievable. I’ve given a dog and a bitch to young Aaron Williams down at Goulburn as well.”

Spiteri has identified Fernando Bale as Amyjo’s next suitor while 18-time winner Bland Purr, a daughter of his grand galloper Let It Develop, will be going to Sh Avatar. 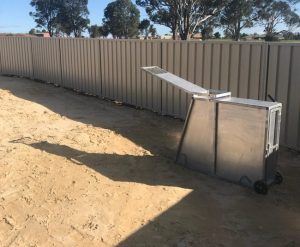