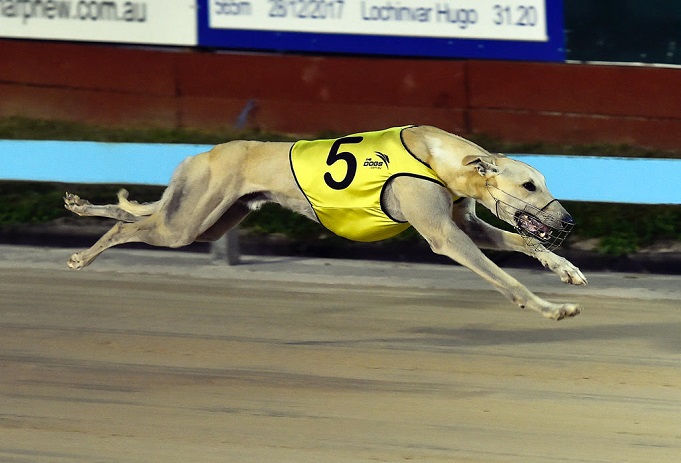 TRAINER Darryl Thomas admits to being left with mixed emotions after his star sprinter La Grand Quality returned to racing with a near record 24.68 victory at Maitland last Thursday afternoon.

Going within 1 ½ lengths of the 450 metre time-standard held by Pindari Express at 24.59, La Grand Quality was simply sublime scoring by 6 ¼ lengths, taking his career record to four electrifying wins from seven appearances.

Back in July, Thomas was on top of the world after the star son of El Grand Senor carved out a slick 22.82 to land the $15,000 to-the-winner Taylor Family Maiden Classic (407m) at Grafton, turning in mesmerising heat and final performances to claim victory.

The win was made even more satisfying by the fact Thomas and his star charge had been involved in three significant car accidents; incidents that could have quite easily claimed both their lives in a heartbeat.

In a sad twist however, Thomas came plummeting right back to earth recently after being notified by the Greyhound Welfare & Integrity Commission (GWIC) that La Grand Quality had returned a positive swab in the Grafton feature.

It’s understood the positive swab was to three sedative and anesthetic type substances; its believed origin from horse meat that had been shipped from Victoria to NSW to alleviate a supply shortage at the time.

“I won’t say I’ve been a wreck but I’ve been right on edge,” an emotional Thomas told the Recorder.

“Having to tell the dog’s owner Kellie Fogarty what’s happened was very hard. She’s put her faith in me with such a special dog … yeh telling her was very tough.

“I’m not dirty on GWIC, I understand they have a job to do but so do us trainers. We put our trust in others and there’s no doubt the positive has come from contamination in the meat supply that many of us use in my area.

“I’ve spoken to vets about what these three substances are and they’ve told me not in your life would you use them as performance enhancing substances in greyhounds.

“Two of them they almost couldn’t believe; I don’t know what the levels returned yet are but you can bet they are low.

“When you think about it, I’ve travelled seven hours back and forth for weeks on end to prepare the dog for the race knowing full well he’d be swabbed … I just hope common sense wins through.”

While Thomas is philosophical about his current plight, he’s remaining more hopeful than confident that a sensible approach will be used to deal with the situation facing both he and others.

“I know of 3 to 4 trainers around me that have received positives to the same thing but there could be more,” Thomas said.

“Those trainers get their meat from the same place as me so it’s clear as day what’s happened. The supplier has admitted to bringing horse meat from Victoria where their rules are more relaxed as to what can be used and when.

“I’ve been all over the place since the news; it’s the first thing I think about in the morning and the last thing at night. We talk about animal welfare but what about the welfare of participants?

“I’ve had grown men on the phone to me sobbing about what’s happening, it’s very distressing.”

Such is the toll the ordeal has taken on Thomas and his family, the Sawyers Gully trainer admits to having been perilously close to scratching La Grand Quality from last Thursday’s Maitland assignment.

“I was driving home from Wentworth Park on Wednesday night and I was thinking to myself I’ll scratch him from Maitland, I was right on edge about it all,” Thomas said.

“You start second guessing yourself and worrying about what others are thinking of you but I know 100% what this dog is capable of and how good he is. Even walking to the boxes on Thursday it was getting to me.

“The other week the dog trialled 22.04 over the 400m at Maitland and Lochinvar Chase went 22.13. Give this dog an early race on a good track and he’ll break Pindari Express’s record … no doubt.”

With a handful of trainers embroiled in a situation where everything points to contamination of the meat, Thomas is growing increasingly frustrated with the lack of detail from GWIC.

“This is my livelihood,” Thomas stated.

“But in saying that I’d probably still race for nothing. I was told a letter was coming from GWIC within 10 days and Friday was the tenth day. Every day the post lady comes and I run down to the letterbox but nothing as yet.

“I don’t know where I stand. I’ve invested a huge amount of money in my property here and I’m just sitting in limbo from one day to the next.

“The dog got pre-race swabbed on Thursday at Maitland and I’ve never looked more forward to a swab coming back – more for myself than anyone else.

“We just need common sense used. Us trainers can’t lose our livelihoods for something we haven’t done and have no control over. Meat, Kibble, supplements – we buy these things in good faith.”

Only last month, GWIC posted a warning on their website regarding contaminated meat and the positives swabs returned in the Hunter Valley bears witness to contamination.

Make no mistake, trainers are required to present dogs for racing drug free yet GWIC is cognisant of the issues in the case(s) at hand and no interim suspension has been issued.

Every case is dealt with as a separate entity and proper investigation must be undertaken regardless of circumstance.

GWIC understands the stress is challenging for those involved and, while all bases must be covered, the outcome will be expedited in a timely manner.