SHIMA Shine silenced any doubters with a stunning victory in a heat of the Group 1 Harrison-Dawson at Sandown Park on Thursday night.

SHIMA Shine silenced any doubters with a stunning victory in a heat of the Harrison-Dawson at Sandown Park on Thursday night.

On the coldest race night of 2021, Shima Shine defied the conditions to narrowly miss becoming the first dog to break the 29 second barrier twice, stopping the clock at 29.003 and powering into his seventh group 1 final.

“I wasn’t expecting that but when the time came up I was pretty wrapped.”

While Shima Shine has long been regarded one of the country’s fastest greyhounds, his inconsistent box manners was cause for concern for some, especially with just one win from his five previous starts entering the series.

However he soon put paid to any concerns, capitalising on a clean run to the post to carve out impressive splits to record the eighth fastest gallop ever at Sandown Park.

“You can’t win every race and he doesn’t,” continued Heinrich.

“But he’s got the ability and he does it when he needs to and that’s all we can ask.”

He’ll face a familiar foe in the final, with Tiggerlong Tonk proving that he is still very much at the top of his powers.

The recent Perth Cup winner ran a close up third in this race in 2020 and is set be a leading contender in the 2021 edition following his 29.10 heat win. It was the 20th metropolitan win of Tiggerlong Tonk’s career and 11th at Sandown Park.

Remarkably, it was the fifth time that he’s sub 29.20, matching Hall of Famer Fernando Bale (and 2015 Harrison-Dawson winner) as the only two greyhounds to accomplish the feat.

Remarkably, this will be the ninth time the pair have met in a group race final with Tiggerlong Tonk holding a 7-1 advantage in those finals – and is 3-0 in finals at Sandown Park.

Earlier in the night, four heats of the group 1 Sapphire Crown for female greyhounds were also run, with Warrnambool Cup winner Qwara Bale setting the time standard when running 29.28.

Both group 1 finals will be run in conjunction with the heats of the $250,000 group 1 RSN Sandown Cup Sandown Cup – the world’s premier distance race – on Thursday 20th May. 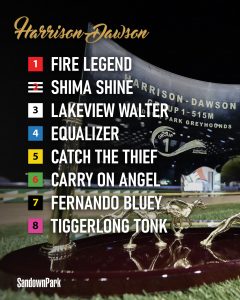