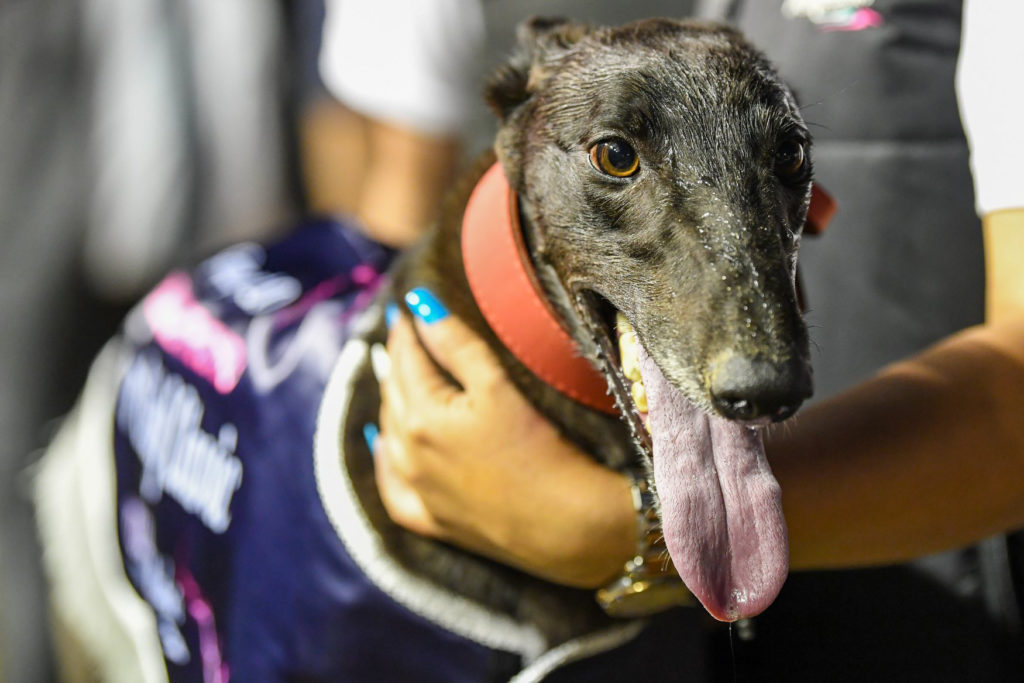 “If anything I hope he’s not too fresh – he’s jumping out of his skin,” Burnett said.

“I can’t fault his preparation at all. In fact, he’s as good as I’ve ever had him, but drawing box four in a heat with plenty of speed means there’s no margin for error. He’ll need to do everything right – but he generally makes his own luck.”

It was Melbourne Cup night last year that Simon Told Helen truly announced his arrival as a genuine superstar of the sport.

After finishing second to eventual series winner Whiskey Riot in a heat of the Melbourne Cup at just his ninth race start, Simon Told Helen tackled the Group 3 Cup Night Sprint (515m) a week later, disposing of a top field of greyhounds with sheer arrogance in a sizzling 29.36.

“That was the night that told me more than any other what we had on our hands,” Burnett said.

“To beat up a field like that in the fashion he did at just his tenth start was remarkable. And he ran faster than they did in the Melbourne Cup final.”

The dashing performance proved to be the springboard for an extraordinary 12 months of racing which netted a swag of group race wins right around the country and culminated with Australian Greyhound of the Year honours.

And while Simon Told Helen’s bulging resume boasts some of the biggest races the sport offers, Burnett admits that a potential Melbourne Cup triumph would hold even more significance.

“It would be the icing on the cake,” Burnett said.

“Being realistic he’s likely not going to get a shot at it next year so if he’s going to win a Melbourne Cup this is it.

“But there are 64 exceptional greyhounds there on Friday night that have all earned their shot. Some luck and good fortune will go a long way.”

Winner at 23 of his 40 career appearances and placed on another 11 occasions, Simon Told Helen enters Friday night’s Melbourne Cup series with earnings of $752,000.

His Sandown Park record is equally remarkable, his 11 appearances returning six wins and four seconds – his only blemish an unlucky fourth at just his seventh race start.

And while his envious race record and list of feature race wins is something to behold, Burnett explains it hasn’t come without its share of detractors along the way either.

“I hear the knocks – every week,” Burnett said.

“He’s tardy early, he’s weak … even he’s lucky. But you don’t get bogged down in all that. When you sit back and look at what he’s achieved around the country and the record he has you can’t have done much more.

“And he’s missed a few big races along the way for one reason or another as well.”

Friday night’s Melbourne Cup heats brings together the country’s premier 64 greyhounds, each earning their way into the series by varying qualification.

“I think that’s what makes winning this race so important,” Burnett said.

“The best of the best are there so to win it gives it that added meaning and value.

“I’ve had two Cup chances in the past but they were both outsiders so to be going in with one of the favourites is a different feeling.”