A tragic Speed Star punting tale begins this week's The Sunday Afternoon Finish On with one punter .001 seconds away from a $15,000 collect.

In its infancy, Sandown’s Speed Star series seemed a complicated betting medium yet, once the nuances were honed, the head-to-head racing (and wagering) evolved into an exciting and extremely watchable format.

And on Thursday, the clash between Catch The Thief and Christo Bale was decided by .001s – the narrowest margin in the five-year history of the event.

Punters are a hardy lot and need to take ‘bad beats’ in stride yet Ross Davidson – erstwhile handler of Shima Shine, Faithy Bale and Gladioli Bale for their Million Dollar Chase campaigns – has a Speed Star “bad beat’’ tale to tell.

Breeder and part-owner of Sunset Bourbski, Ross had good reason to be over the moon after his in-form stayer kicked off an all-up bet on Wednesday at The Meadows.

With Keefe the third quickest over 725m, a second all-up was on target following Houdini Boy’s commanding win over 600m and it was all up to Catch The Thief.

Just over $14,500 was saved from Sportsbet’s coffers when Christo Bale arrived – the only saving grace being a $100 place bet on Keefe at $18 but this one is a finalist in the bad beat “Hall Of Fame.’’

A good day out for Rossco, one he’ll cherish, yet Christo Bale’s last bound will haunt for evermore.

The movement of the Andrea Dailly-trained quartet (Shima Shine, Faithy Bale, Jax Bale and Gladioli Bale) to NSW with quarantine restrictions in place has been executed with military precision.

Not only has Ross Davidson looked after the quartet at his Wallerawang base, he’s done all the hard yards transport-wise.

“Tom (Dailly) arranged with a transporter to move the dogs into NSW with the proper permits in place and I’ve met them at Albury three times now,” Davidson said.

“Ït’s a 5-1/2 hour trip down to Albury but the dogs are seasoned travelers and have not missed a beat.

“They arrive the day before the race and leave the next day, so Shima Shine spent 11 hours in the car before his Bulli win and we do it again this week.”

COVID-19 has shut industry down but this new service … greyhound racing’s own, virtual Uber service, has been a runaway success but it’s not a long-term project.

“I’ll be happy when life gets back to normal,” Davidson added.

“This is a means to an end … it’s what you do for friends but I’ll be delighted to hand the travelling back to Team Dailly.”

Shima Shine’s near track record win (25.82s) at Bulli on Tuesday in the second Million Dollar Chase heat was a complete performance.

What could not be missed in the MDC heat was the effort of runner-up Wow.

It was just that. Wow.

He’s up against it in the Bulli decider (with Shima Shine ideally drawn in box eight) but he certainly deserves a place in the MDC semi finals on October 9.

THE NEED FOR SPEED

With microchips in racing rugs, an enormous about of data is collected by GPS-type process and, while there were minor glitches (Look Fancy Nancy, for example) at The Meadows on Wednesday, it should be the dawn of a new era for greyhound punters, owners and trainers. 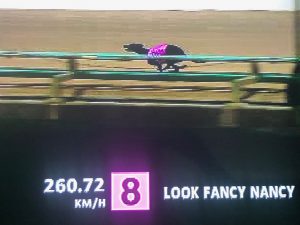 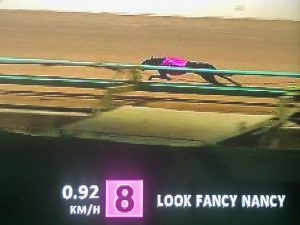 Accurate sections can be broken down to any number of desired distances (just 20m after the start for example) and ultimately will show how far a wide runner travels in a race compared to a tight railer.

The Brook Group, the national agents for the FinishLynx System (the most used photo finish camera system in Australia,) will market IsoLynx nationally and it certainly has people’s attention.

The presentation is first class.

GCA Chief Executive David Simonette – in conjunction with the vast array of talent at the Western Australian Academy of Performing Arts (WAAPA) – conjured up the “Greytest Show On Earth” for the 2019 National Championships awards night in Perth – and, while very different in scope, has again delivered the goods.

From 8pm, the vision is here: LINK TO THE AWARDS HERE

While Serious Object might have missed Myrniong And All’s 350m track record (19.35s) at Goulburn on Friday, he did create a new benchmark for the popular sprint trip.

His run home time (13.01s) also set a new mark, with Myrniong And All missing that sectional standard by only .01s.

He’s yet to be tested beyond 400m and yet his win at that trip at Bulli (22.10s) is fifth fasted at the Slacky Flat venue.

Serious Object’s only experience has been on a one-turn track but this rising two year-old is a serious talent.

While the Million Dollar Chase hold the attention of trainers for the moment, the Melbourne Cup Prelude series is looming large.

COVID-19 restrictions had forced Sandown to trim their usual four-week series of prelude qualifiers yet the time honoured final will still be staged on November 27.

Sandown is still working through the complete renovation of the track surface and, weather permitting, a return to racing will be decided up this week.

Should there be no glitches, racing may resume View Road circuit will have an October resumption.

The track surface is fully Burrumbeet sand and it will be interesting to see how the track plays – time wise – coming into the Cup series.

The surface by the time of the November 20 heats will have been bedded down for more than six weeks and be in tip-top shape.

The running of the Irish Derby was held on Saturday night without the usual wall-to-wall crowd attending Shelbourne Park.

The iconic venue, in the heart of Dublin, is a seething mass of humanity in mid-September but COVID-9 made this a very different Derby with 11/8 favourite Pestrana – the track record breaking 28.99s Round 2 heat winner – striking early trouble and falling at the first turn.