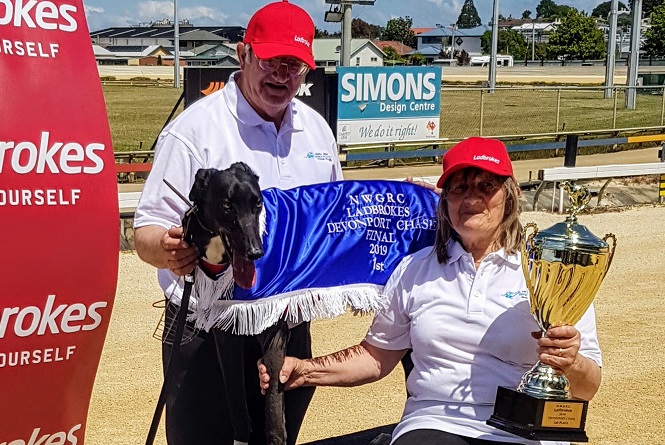 Back in 2011, St. Pierre took out the Devonport Cup decider before going on to win the Group 1 Australian Cup at The Meadows a few months later.

The winner of 23 races and almost $250,000 in stakes was trained by Debbie Cannan throughout his stellar career and she shares in the ownership of Tuesday’s Devonport Chase hero Stop Line.

Trained by Jillian and Richard Stamford, Stop Line, a finalist in last year’s Hobart Thousand, took his record to a remarkable 30 wins from 48 starts with Tuesday’s powerhouse victory, the $25,000 in stakes he picked up for connections taking his overall earnings to just on $90,000.

“He’s been knocking on the door to win a big race for a while now … he deserves it,” said Jillian Stamford after the race.

“He’s been unlucky in a few big races including the Hobart Thousand last year so it was great to get a good race finally – he loves Devonport.”

After only moderately away from box one as the red-hot $1.70 favourite, Stop Line powered along the inside to join early leader Leica Prayer through the middle stages and assume front running.

From there the group 3 feature was only heading in one direction, with Stop Line scoring by 4 ¾ lengths over his gallant kennelmate Leica Prayer, the daughter of Dyna Double One delivering Stamford the quinella.

The sizzling winner’s time of 25.28 was just a length outside Stop Line’s sublime personal best time at the circuit of 25.21.

“I didn’t expect him to go that fast the way the times were today with the conditions,” Stamford added.

“We’ll go to the Hobart Thousand next week and hope for some good box draws but the dog is going great. He’ll have a pretty easy week I’d say.”

Shantung Tiger also won the Devonport Cup in 1997 while Jim Bowie landed the feature for the Stamford family in 1994.