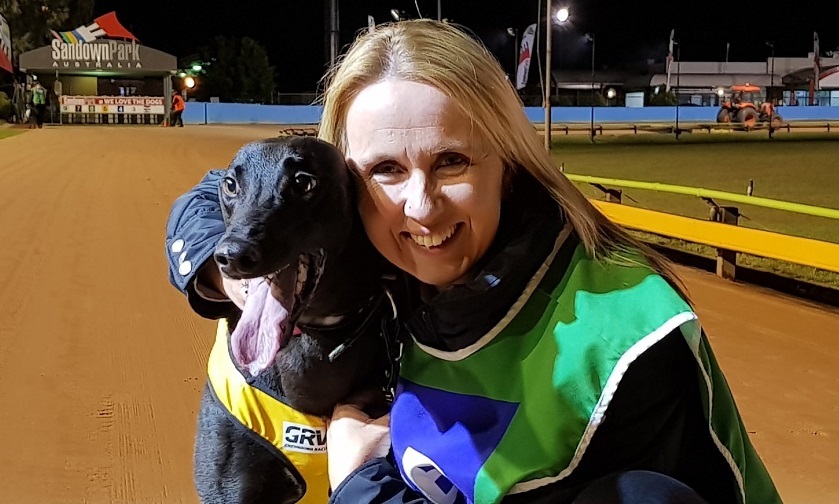 Black Opium, the 2018 Melbourne Cup and 2019 Australian Cup runner-up, was having her fourth start back after spending almost four months on the sidelines due to a hock injury sustained in the Group 1 Topgun last November.

After finishing second on resumption at Geelong, the daughter of Thompson’s 2013 Melbourne Cup winner Black Magic Opal won at Shepparton in 25.14s and then showed she was back to her best with a scorching 29.64s romp at The Meadows.

Drawn in box six in a mixed 4/5 grade event over 520m, Black Opium was the headline act at Sale’s Sunday program and the $1.50 favourite didn’t disappoint.

Black Opium flew out and after posting a record-breaking first section of 9.13s, she put her rivals to the sword, trouncing runner-up Zipping Lena ($4.10) by 4.46 lengths in 29.011s, less than a length outside Shooting Star’s 28.97s track record, established back in 2008.

“We had her earmarked to run in the heats of the Easter Egg last Saturday night but unfortunately the Easter Egg was postponed and she needed a run, hence we took her to Sale,” Thompson explained.

“She hurt her hock so I gave her an extended break. She’d been up for a while and I don’t think it’s done her any harm.

“She was underdone at her first run back and she’s shown she’s back on track with her next three wins.

“Going into Sale, she’d had another break with the virus, like a lot of dogs.

“She went nice. She showed plenty of speed – they tell me she broke the first split record – and I was really happy with her run.”

Thompson said the uncertainty hovering over racing due to the coronavirus pandemic makes it difficult to plan too far ahead with Black Opium and a number of exciting prospects in his Pearcedale kennel.

“We’re just looking at it week by week,” he said.

“Each day we get through is a bonus, not each week, each day, in the context of what’s happening in the world.”

Thompson also produced the quickest winner over the 440m course on Sunday, with youngster Zambora Smokey (Zambora Brockie – Zambora Cross) earning high praise as he continued the bright start to his career in a Grade 5 Final, leading all-the-way in 24.50s, his sixth win from 10 starts.

“His time was outstanding.  I rate him very highly,” Thompson said of Zambora Smokey.

“He’s not two years old yet and I think he’s got a massive future.

“He’s got enormous speed and while he’ll run 500, I think he’s a real half-circle dog; an Aston Bolero type.”

Thompson also provided a glowing recommendation for Wild Card (Kinloch Brae – Segovia), which opened his account at his second start with a barnstorming 25.22s victory in a 440m maiden heat.

“You can’t take anything out of his time.

“Because of the current situation he’s been rushed a bit to try and get some race experience in case we do stop racing at some stage. If things were normal, he probably wouldn’t have started for another six weeks.”

Thompson’s fifth win came courtesy of Taken (Fernando Bale – Smitten) in a 440m mixed 4/5 (24.90s), while he came within half a length of claiming a sixth winner with Bad Guy (Black Magic Opal – Flying Sparkles) edged out in the Vic Bred Maiden Final over 440m.