EXCITING juvenile Ultimate Speed will be auditioning for a tilt at next month’s SA Derby when he steps out in the second event at Wentworth Park this Saturday. 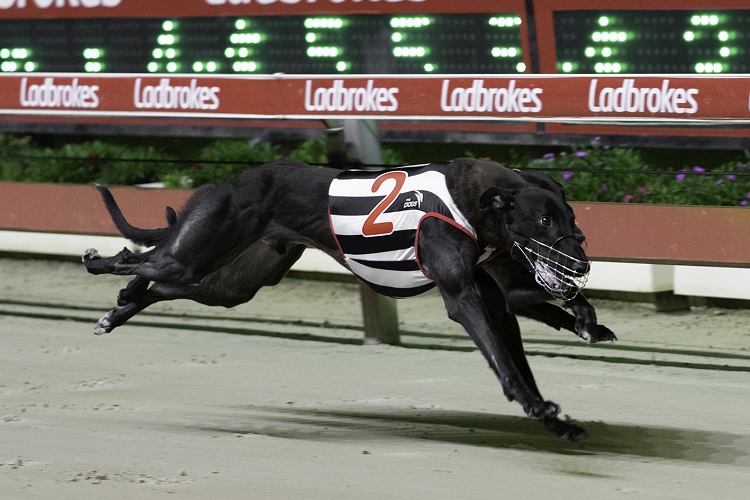 EXCITING juvenile Ultimate Speed will be auditioning for a tilt at next month’s Group 3 South Australian Derby when he steps out in the second event at Wentworth Park this Saturday night.

Trained at The Rock by Brian Smith, Ultimate Speed caught the eye of racegoers at Wentworth Park last Thursday night when scoring in an electrifying best of meeting 29.64, the son of Fabregas’s third career victory.

“His first few runs down in Victoria before I got him were pretty ordinary, he actually got a ticket at his second start,” said his trainer Brian Smith en route to Shepparton on Thursday.

“The dog’s owner Craig Davis gave me a call and asked me if I’d like to give him a go … by all reports he’d broken in good, the whole litter had, so I decided to take him on. I’ve had dogs for Craig before.”

Early betting has Knighthood favourite at $2.10, ahead of Ultimate Speed and Shanjo Prince at $3.20 apiece.

“It’s a very tough race and he’ll need to come out … he can get in the habit of getting back in the boxes so I’ve been doing a bit of work with him on that, hopefully it helps Saturday,” explained Smith.

“To tell you the truth it’s amazed me just how much this dog keeps improving.

“Before his first Wenty start a few weeks back I trialled him over the 400 at Wagga and he went within half-a-length of the track record. Even when I gave him a clearance trial there he broke 23 … not many dogs can do that.”

Under the guidance of Smith, Ultimate Speed has faced the starter on seven occasions for three wins, his victories at Wagga, Temora and last week’s staggering Wentworth Park performance.

“I’ve given him three starts in Melbourne as well for no luck,” pointed out Smith.

“He had two starts at The Meadows from bad boxes  after trialling 30.20 there and at his Sandown start a dog fell in front of him and took him out.”

Smith attributes the son of Fabregas and Sweet Shine’s new found form to a few subtleties.

“When I first got him he had some injuries that needed ironing out and I think he’s just a dog that thrives in a smaller kennel with the one on one attention. Plus, he probably never had a good spell after break-in either, he’s come back a completely different dog.”

All things being equal, Smith expects to test his charge in the fast approaching Group 3 SA Derby at Angle Park, the heats of the $25,000 to-the-winner feature on September 12.

“Being an age race it looks ideal for him,” explained Smith.

“As they say you’ve got to be in it to win it … the first thing you need is the class of dog and then you need a lot of luck as well.

While the upcoming SA Derby is firmly on Smith’s radar, he admits that he’d be crazy not to entertain a crack at the TAB Million Dollar Chase if his prized galloper continues to develop at the rate he is.

“It’s coming up and if he keeps stepping it up like he is then I’ll have a look at it and see what qualifiers we can go for,” added Smith.

“He’s taken to Wentworth Park like a duck to water which is a big help, especially for that!”