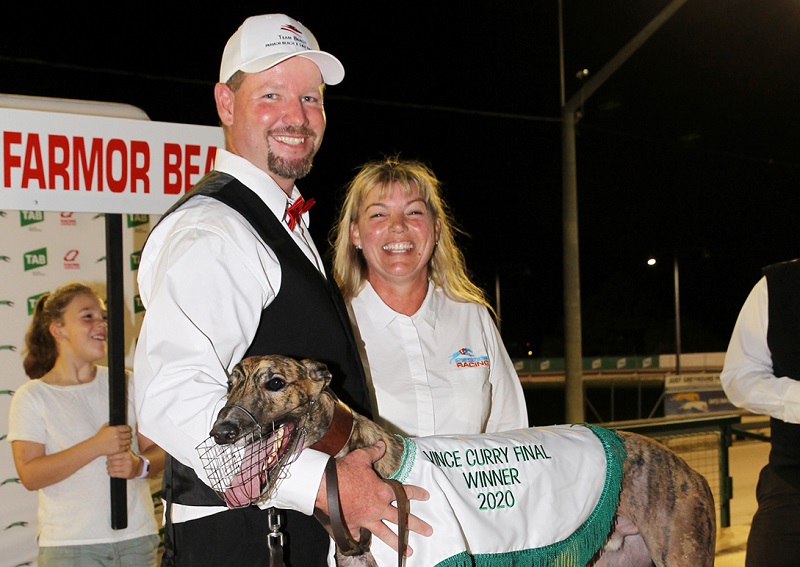 SCINTILLATING Group 3 Vince Curry Maiden winner Farmor Beach is on target for a tilt at the upcoming Launching Pad at Sandown.

Coming off the coveted rails draw and starting a $1.45 favourite, he was soon in front, beating Northern Ripple with a length and a quarter to Flying Jet in third.

He remained unbeaten throughout the Vince Curry series after winning his heart in 30.33 and semi-final in 30.48.

“I’ve spoken to Robbie Britton about coming to Melbourne for the series and ideally we would like to get two or three trials around Sandown into him before the series.”

“Robbie is in Ireland at the moment and we will talk to him about Farmor Beach coming south for the Launching Pad when he gets home,” said Steve.

Scott was a bundle of nerves all week in the lead-up to the rich final on Saturday night.

“Not in regards to the dog himself, but worrying about the virus that has hit Queensland’s greyhound kennels with such force in the past couple of weeks,” he said.

“I purposely did not enter another dog, and we have 40 in training, all week in the lead-up to the final just in case they brought home the virus.

“And, I constantly had people ringing me concerned he might pick up the virus.

“It was great of them because they were being so supportive, but it didn’t help with my pre-race nerves.”

But, Farmor Beach, raced in partnership by Steve’s father Wayne and great kennel client Scott Duffy, was never in any danger of losing the Vince Curry final.

The Scott family and friends had started the Vince Curry party even before getting to the track.

“We got a bus from Toowoomba to pick us and friends up and along the way we had a bit of a pub crawl before getting to Ipswich track,” said Wayne.

“Win, lose or draw we needed to celebrate being in the final.

“The celebration ran to 45 people and that included Scott and his crew from the Gold Coast.”

“Steven whelped the Fernando Bale-Kinloch Beach litter for Scott and got a bitch pup for doing so,” said Wayne.

“Then Scott asked us to rear the entire litter and we would go halves in them all. That’s how we got Farmor Beach. The name was a natural.”

Wayne Scott names all his greyhounds with the Farmor prefix, while Scott Duffy has Beach as the last name in the majority of his dogs.

Farmor Beach is the first dog from the litter to race.

“He’s easily the best I’ve trained,” said Steve. “And, we must remember he has raced 520 metres only three times, in the Vince Curry series. You would think there is a heap of improvement in the dog yet.”