WILD Flyer makes her eagerly awaited middle distance debut at Richmond tonight but to make it a successful one she’ll need to overcome Dylan’s Magic. 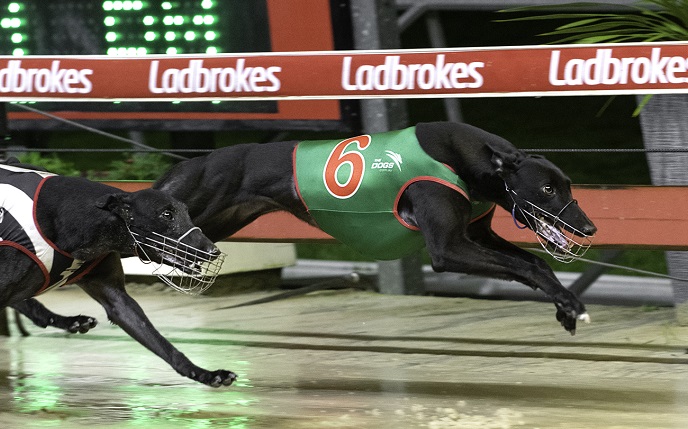 And when you consider Look Like Fancy – a sizzling 35.37 winner at the track and distance – takes her place in the event also, all is in readiness for a ripping contest over the 618 metre journey.

“The plan has been to step her up in distance for a while. She can run the time in 500s but she can be that bit slow away and in the big races you can’t be giving dogs a start, like she did in the Futurity.”

A daughter of Fabregas and Big Chicken, Wild Flyer goes into tonight’s clash as the winner at 10 of her 21 starts, last seen when out of the money in the Richmond Oaks after qualifying fastest for the Group 2 event.

“She bloody missed it two lengths off the eight,” said Vanderburg of the Oaks.

“She’ll run you 30.40 every day of the week at Richmond over the 535m and her last section is her best section. I wouldn’t say she’s a faster bitch than Miss Splendamiro but I would say she’s stronger. Her run home times are very, very good. But whether she runs 700 – you don’t know until you try.”

Tonight’s Richmond event is anything but a seamless entry into the middle ranks for Wild Flyer, tackling a red hot Dylan’s Magic, the John Finn-trained powerhouse scoring at Wentworth Park last start in a slashing 42.18 over the 720 metres.

A winner at five of his nine Richmond starts, the son of Fernando Bale makes his 618 metre debut at the circuit, ideally suited from box two in the reduced six-dog field.

And in what looms as the race of the program, bookies have the pair equal favourites at $2.25 apiece.

But after speaking with an always rather guarded Vanderburg, you can’t help but get the feeling he goes into tonight’s clash with a sense of optimism.

Interestingly, race three of the program sees the Vanderburg-trained Bounce Back take his place in the 535 metre maiden as the $3.80 second favourite, with the top elect John and Minnie Finn’s first starter Winsome Thunder at $2.40.

“I had him ready for the Wenty maiden next week which has been called off,” Vanderburg said.

“But he should go well tonight. He’s trialling very good.”

Bounce Back has placed at three of his four career starts while Winsome Thunder debuts off a slick 30.89 performance trial at Richmond on February 14.

Also considered a strong chance in the event is Nangar Kane for Neville Brown, the son of Bella Infrared in the money at two of his four appearances.